Litecoin and Dash, two altcoins with enormous promise, are having a tumultuous 2018. Both coins have steadily declined over the course of the year. With the latest price decline across the market, both cryptocurrencies are now at a crossroads.

Litecoin Struggles to Stay Above $100

For Litecoin (LTC), the bears couldn’t have come at a worse time. The sixth-ranked cryptocurrency by market capitalization has been steadily declining since the start of May. On May 7, LTC price reached $180. That was the last time Litecoin traded above the $150 mark. 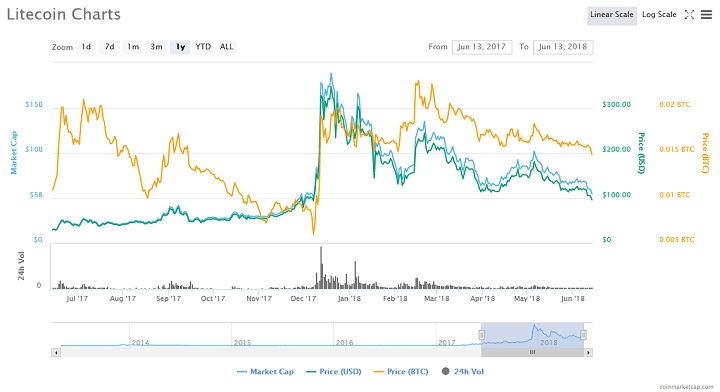 In the last three days, Litecoin fell significantly in the space of mere hours indicating what might be a stubborn bearish trendline. At the time of writing this article, the price has fallen below the $100 mark – a major psychological price barrier for Litecoin.

Presently, the sixth-ranked cryptocurrency has declined by more than 60 percent since the start of the year.

The last time LTC traded below $100 was in mid-December 2017 right before it experienced an astronomic spike that sent LTC prices soaring above $300. This price surge coincided with a peak period in the market when many other top coins experienced significant gains.

It all began in late December 2017, when Litecoin creator, Charlie Lee announced the sale of his entire LTC holdings. Prices dipped more $100 in the days after the announcement and have struggled ever since. Then there was the LitePay debacle earlier in the year when the flagship Litecoin payment service failed to launch.

Now, Lee’s “silver to Bitcoin’s gold” creation has found itself relegated to the background of the “top-coins” narrative. Recently, some analysts have predicted that Litecoin could be in line for a massive price surge. However, the current troubles indicate otherwise – at least, for the time being.

Where Litecoin has been in steady decline, Dash has all but crashed. The 13th ranked cryptocurrency is down by an astonishing 300 percent. Regulatory prohibitions over its privacy-focused operations have blighted the once top-ten coin. Together with Monero, Verge, and other privacy-focused coins, Dash has been trending down all through 2018. 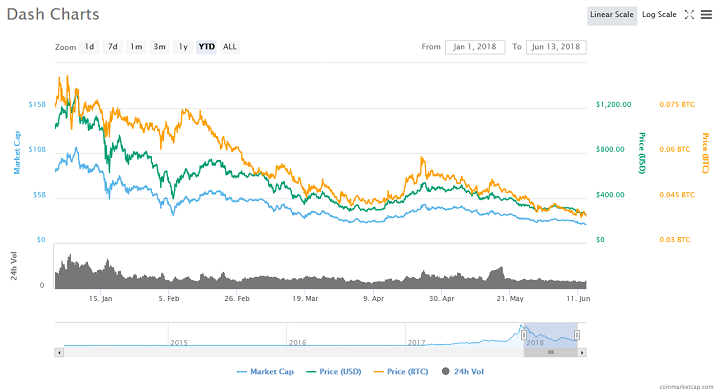 Dash began the year trading just above the $1,000 mark but has crashed to $257.98 (at the time of writing this article). The cryptocurrency is at its lowest level since August 2017. It seems like such a long time ago that Dash was trading at $1,600. The question for right now is what the bottom for Dash is.

EOS Produces Its First Block But Votes Not So Decentralized